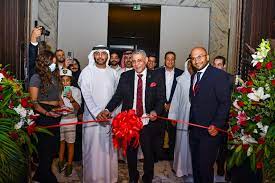 Al Nayrouz Exhibitions, organizing company of Hazi Misr exhibition, has announced the success of the 15th session of the exhibition, from 28 to 30 October, with the participation of 20 real estate developers showcased more than 100 diverse projects.

The 15th edition of the exhibition was launched at Le Méridien Dubai Hotel under the auspices of Sheikh Said Bin Tahnoun Al-Nahyan and Egypt Club in Alain and Ministry of Housing, Utilities and Urban Communities in the presence of Major General Dr Mohammad Abdullah Al Murr, Director of the General Department of Human Rights, MP Amin Masoud and Ahmed Abu Aguila, president of the Egyptian Club in Dubai.

Chairman of Al Nayrouz Exhibitions Islam Burhan said that the success of previous exhibition’s editions prompts the company to constantly provide elements of excellence to exhibiting companies and customers.

Burhan added that the Hazi Misr exhibition is characterized by diversity in portfolio of projects presented to visitors to suit the largest segment of target customers.

He noted that Egyptian real estate market, with the scale of urban development it is witnessing and various projects that are being developed in various parts of the republic, led to more diversity in projects presented during the exhibition’s period.

He pointed out that there is a diversity of projects offered in cities of New Administrative Capital, New Alamein, Fifth Settlement, Beit El Watan, Mostakbal City, Ain Sokhna, North Coast, New Mansoura and New Damietta. The current period at real estate market is characterized by providing real opportunities for all segments of society to invest or live in new cities environmentally friendly with all means of safety.

He revealed the company’s plan to organize Hazi Misr exhibition during the first half of next year in Riyadh, Saudi Arabia and Doha, Qatar.
For his part, Vice Chairman of Al Nayrouz Exhibitions Haitham Burhan said, “In light of the directives of political leadership, this year the company sought to present in its exhibition more than 20 real estate developers with more than 100 projects to bring real investment opportunities, whether residential, commercial or hospitality to suit all customers.
He added that the exhibition is a good opportunity to compare between offers provided by exhibiting companies, and customers have an opportunity to take advantage of the companies’ discount, which reached 40% besides, facilitations in payment methods that attracted the largest number of visitors. Therefore, the current edition of the exhibition this year is one of the most successful editions in terms of noticeable turnout on the first day.

He further said, “This year is the tenth year of Hazi Misr exhibition. Moreover, the company was keen on organizing an exhibition different from the previous editions in terms of the unified exhibition decoration, which won the admiration of all the attendees.”

The company is committed to maintain this success, provided that the exhibition next year will witness a greater spread in Gulf region starting from Riyadh and Doha in addition to Abu Dhabi and Dubai in the United Arab Emirates, he disclosed.

Arabisk Development is expanding by 5 new branches as part…